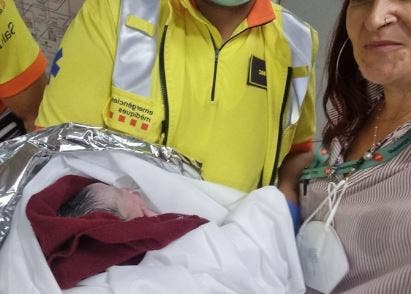 A BABY boy made a dramatic entrance into the world when he was born at a Barcelona metro station.

When Cristina felt the first pangs of labour she thought she had plenty of time to travel by metro to Barcelona’s Hospital del Mar where she had planned to give birth.

The baby, however, had other plans and made an early appearance in the world at Ciutadell-Vila Olimpica metro station on the yellow Line 4.

The labour was remarkably quick and baby Angel, as he has been named, arrived after a mere three pushes, shortly after 10.45am on Thursday.

In a stroke of luck, a fellow passenger who approached the desk at the same time as the expectant mother reached it to ask for help, was a trained health professional and knew exactly what to do.

Also on hand was Metro worker, Vanesa, whose own son was born on the same day, 20 years ago.

Both mother and baby were soon transferred to hospital where they are said to be doing well.

A tweet by Barcelona Transport Authorities congratulated new parents Cristina and Jesus and thanked Vanesa, Yolanda and Ruben for helping in the birth of Angel.