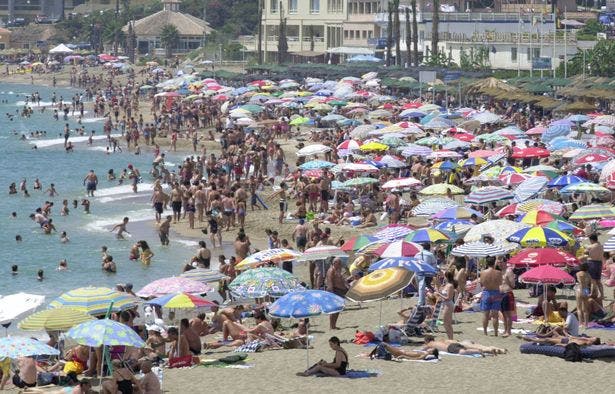 MALAGA high season kicks off with perfect weather and tens of thousands of people hitting the Costa del Sol beaches.

The first holiday weekend of the summer, June 30 – July 4, has seen Malaga completely recover its tourist image with beaches up and down the coast teeming with beach-goers.

Although Covid infections continue, this summer is the first in two years without restrictions and the forecast is for tourist arrivals to Malaga to surpass 2019 figures.

According to the Junta, the number of tourists to Andalucia could exceed 30 million, with an average occupancy in the summer months of 73%, with Malaga seeing a rise to 85%.

Figures recently stated by the vice-president and acting councillor for Tourism, Juan Marin, who spoke of a ‘historic record’ in the region.

The good forecasts are only clouded by the airline strike, which this Sunday has caused five cancellations and delays in 14 flights at Malaga airport.

But after two years of pandemic, citizens are eager to travel and the buzzing airport reflects this with around 1,900 flights scheduled between last Friday and today, Monday July 4.

This summer season, which ends on October 29, will see the airport operate 92,000 flights with 16 million seats, recovering traffic volumes similar to pre-Covid.