TRAFFIC speeding along the Málaga-Granada autoroute zips past the hamlet of Riofrío in seconds, but not a few travellers peel off to enjoy a lunch of fresh trout. Thousands of trout swimming about in fish tanks guarantee the local restaurants will not run short. 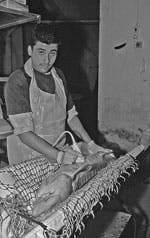 What most visitors are unaware of is how close they are to “black gold.” The Riofrío company, Piscifactoría de Sierra Nevada, has an ace up its sleeve: apart from trout, it is rearing 400,000 sturgeon to produce top-quality caviar.

This daring business venture was launched in 1983 and the first caviar (a mere 20 kilos) was not marketed until the year 2000. Now every year several thousand kilos are sold. It is in demand from gourmets around the world. Produced in strictly ecological conditions using high-tech expertise, Granada caviar has won accolades from international experts.

This comes at a time when by some estimates fewer than 1,000 beluga sturgeon are left in the Caspian Sea, the world’s chief source of caviar, and experts are predicting that they will be extinct in 14 years. Due to mismanagement, environmental damage and over-fishing, the catch has declined drastically.

Attempts by CITES (Convention on International Trade in Endangered Species of Wild Fauna and Flora) to control fishing by setting quotas are not working. With the dismemberment of the Soviet Union and the creation of the new states of Azerbaijan, Turkmenistan and Kazakhstan, international policing is in tatters.

So valuable is this fish roe that it is reckoned four ounces of beluga caviar can be traded for an ounce of real gold. The big returns — the price can soar as high as 1,000 euros for 100 grams — have attracted poachers and mafiosi. It is estimated that, for every 70 million-euros worth sold legally every year, 300 million euros-worth or more is peddled on the black market.

Green to the end

So what is so special about caviar? It did not impress Louis XV. In the early 18th century, Tsar Peter I the Great sent him a consignment, but the French king was allegedly so disgusted by the taste that he spat it out on the carpet at Versailles.

The rich, salty flavour of those little black eggs may not impress you either. But caviar definitely has snob appeal, especially if it comes from wild sturgeon as opposed to those raised in farms. The truth is, however, that farmed and wild caviar are usually indistinguishable.

They certainly argue that at Riofrío where the Piscifactoría claims that it has more sturgeon than any other similar enterprise. It also claims to be the only sturgeon nursery in the world employing a 100 per cent certified ecological process. Indeed, international experts have ranked Riofrío caviar ahead of better-known products from Eastern Europe.

Sales manager José Javier Rodríguez Núñez stresses: “Our process here is totally ecological from start to finish and we’re the only producers in Europe who can make this claim. Also the quality of the final product is guaranteed, unlike some other products sold as caviar which are a mixture of different fish eggs.”

Founded in 1956 by the Domezain family from Navarra, the Sierra Nevada fish farm initially produced trout, during Spain’s hungry years, to supplement infants’ diets. Sales soared and the restaurants at Riofrío flourished. But in the early 1980s, sales slumped and the decision was made to try breeding sturgeon — a risky and expensive gamble.

In 1983 a dozen sturgeon for breeding were acquired from Italy. They were of the Acipenser naccarii species, native to southern Europe. Once this species thrived in the waters of the Río Guadalquivir. Indeed, the sturgeon is said to have inhabited this earth 250,000 years ago along with the dinosaurs. It was fished by Phoenicians and Romans.

For many years a factory at Coria del Río in Seville province produced caviar. But the establishment of dams and weirs blocked sturgeons’ route up-river where they bred, water pollution increased and in 1963 the Coria establishment closed. The last time a sturgeon is known to have been caught in the Guadalquivir was in 1992.

Riofrío offered several important advantages for the establishment of a sturgeon fishery. The physical installations already existed, a series of large concrete-walled tanks previously used for trout. More important, there is an abundant supply of fresh, unpolluted water from a snow-fed acquifer beneath the Sierra Nevada mountain range. The water gushes from the rock at between 2,000 to 3,000 litres a second and at an ideal temperature for trout and sturgeon, between 13 and 16 degrees Centigrade all year around.

Apart from cash, more than 600,000 euros invested to date, the project needed patience — the naccarii species does not produce caviar until it is 16 to 18 years old, twice as long as the Caspian Sea’s beluga sturgeon (Acipenser huso). These are big fish. By that age they weigh as much as 50 kilos. 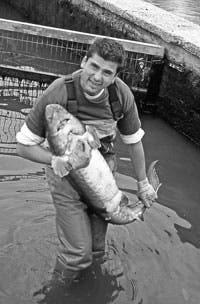 Investigation into the characteristics of the naccarii species has involved Cádiz and Granada universities and Russian and Italian researchers. A shark-like fish with a toothless mouth and four feelers on the underside of its long snout, the sturgeon grows from egg to maturity at the Sierra Nevada fish farm.

Fourteen years passed before Riofrío could market any sturgeon flesh and only in 2000 was the first Riofrío caviar harvested. Thousands of fish now glide languidly about the tanks, many well over a metre long. They can live 90 years or more and reach an amazing size (the beluga species reputedly lives up to 300 years and can weigh more than 1,000 kilos).

About 50,000 kilos of food is scattered every month over the tanks so that it settles on the bottom, where the sturgeons use their feelers to detect it. It’s a special ecological mixture, consisting of wheat flour, fish oil, fish meal imported from France, krill, algae and molluscs. Algae is collected from a marshy area below the nurseries into which the water drains after passing through the fish tanks.

The company points out that the slow, natural maturing of its fish is vital in producing a superior final product: “It doesn’t take the same time to make a good meal as to prepare a pre-cooked hamburger. A primary ecological product will always be richer in shades of flavour, tastier, better and healthier than the equivalent product produced non-ecologicially.”

At eight years old, the sturgeon are examined to determine which sex they are. Males are kept until they are 12, when they weigh around 15 kilos, and then sold for their flesh. But females enjoy more privileged treatment. Each one has a chip inserted with details of its age, diet and other details. It is then returned to the water until it is at least 16 years old when it is taken to the so-called quirófano (operating theatre), a laboratory where an ecograph and a biopsy are carried out to determine if the optimum moment for removing eggs has arrived.

The fish is massaged to induce sleepiness, then despatched with a single, sharp blow to the head. The eggs, normally about 10 per cent of a female’s body weight, are removed, washed to remove the fat around them and dried. Marine salt is added to taste, never more than 3 to 4 per cent, and the caviar is ready. The colour can vary from jet-black to pearly-grey, greenish and gold.

In their descriptions, connoisseurs go into rhapsodies about these fish eggs, employing the same sort of poetic language often used for wines: “Rich in nuances, with a silky, tender consistency, serious and elegant, with a certain aroma of marine breezes”. The truth is that caviar is definitely an acquired taste.

No preservatives are used in most of the Riofrío caviar and the company strongly emphasises quality control. Although caviar can be stored for up to six months in the correct refrigerated conditions, it is at its best when consumed within six days. Riofrío company prides itself on delivering ultra-fresh caviar fast. To special order it can deliver caviar extracted the same day.

“If we get an international order today, the caviar can be on its way within hours to almost any destination,” says sales chief José. “It’s the only service of this type in the world.”

José travels the globe, from Shanghai to New York, expounding the merits of Riofrío caviar to possible buyers — Europe, the United States and Japan are the biggest markets, taking 95 per cent of the world’s production. Twenty per cent of Riofrío caviar goes for export, while the remainder is sold in Spain, chiefly to restaurants and shops.

At a 2005 tasting in Granada international experts compared some of the world’s most prestigious caviars, including three brands from Iran. The product from Riofrío carried off the gold medal. 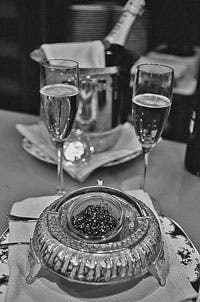 The Piscifactoría de Sierra Nevada (www.caviarderiofrio.com), still run by the Domezain family, employs 30 full-time staff, plus up to 25 temporary workers and visiting researchers. Under the auspices of CITES, it is collaborating with Iranians and Russians to help rebuild their sturgeon resources and introduce the latest technology. It is working on projects with French and German caviar producers. Research is also being carried out into possible use of sturgeon for medicinal purposes.

So you fancy sampling the Riofrío product? If you go for the top of the line, Excelsius Triple Cero, better hock the furniture first. This caviar is competitively priced at around 3,600 euros a kilo. However, you can buy smaller quantities in tins and glass jars, e.g. 60 grams of Clásico caviar cost only 115 euros or so.

Maybe you should stick to sturgeon fillets. The Piscifactoría markets them marinated in brine with spices, thyme and dill, then smoked. It recommends cutting them fine, adding some olive oil and serving them on a hot plate or hot toast to bring out the flavours.

Gourmets claim sturgeon flesh has the same flavour as caviar. So, to experience that millionaire buzz at a cut price, try a dish of sturgeon next time you call in at Riofrío, where it is served in the restaurants.

David Baird is the author of Between two fires – Guerrilla war in the Spanish sierras (Maroma Press) and Back Roads of Southern Spain (Santana Books), due out shortly in a new, updated edition