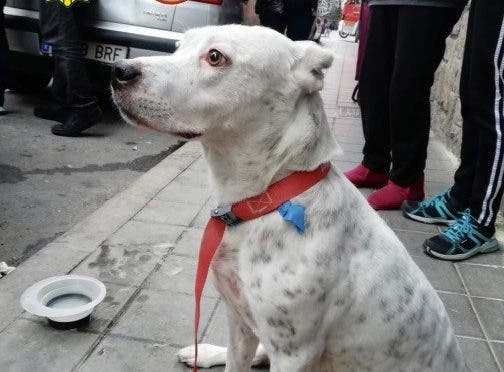 AN Alicante man, 26, was branded a hero after breaking his wrist in the act of catching a dog that fell from a fourth-floor balcony.

The dramatic catch happened last Friday(November 12) and the dog’s rescuer is set to get a civic award.

The Alicante Policia Local got a call that a dog was precariously perched on a Calle Cerda balcony.

The animal had half of its body under the terrace railing and was in serious danger of falling to the ground.

As police rushed to the scene, the dog fell towards the street, but straight into the arms of a man.

Onlookers burst into a spontaneous round of applause and congratulated the 26-year-old hero.

The Dalmatian-Staffordshire Terrier mix animal suffered just a small scratch on one leg and was taken into care by the fire department’s canine unit.

The unnamed rescuer was less fortunate and was taken to hospital with a fractured wrist and two broken fingers.

Alicante’s Security Councillor, Jose Ramon Gonzalez, said: “We plan to recognise the rescuer who proved to be a great citizen not by just rescuing the dog, but doing something that put his life at risk resulting in injuries.”

The Policia Local located the dog’s owner and are investigating the circumstances behind the animal being on its own on a balcony.