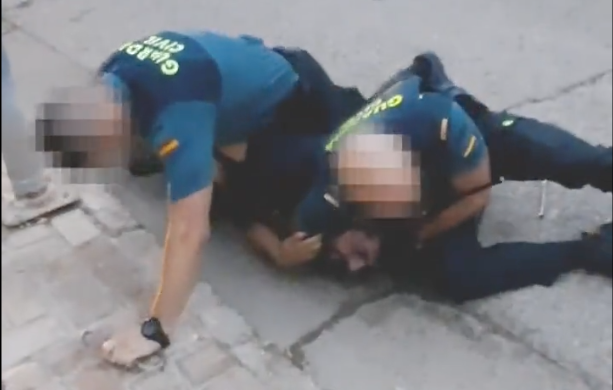 A DESPERATE father has shared videos of his son’s arrest by the Civil Guard in a bid to draw attention to what he considers to be their heavy-handed tactics. Ángel Bejarano, who lives in Sevilla province, lost his son Carlos, 37, seven days after his detention left him in cardiac arrest.

In the videos published by Bejarano on Twitter, Carlos is seen struggling on the ground outside his house on September 12, as three Civil Guard officers try to handcuff him. The man can be heard in the recording having difficulty breathing.

Another video, which Bejarano has not made public, shows the officers performing CPR on Carlos once they could see that he had stopped breathing.

Carlos died on September 19 in hospital as a result of the incident. But nearly two months later, Bejarano has denounced the fact that the autopsy has still not been supplied to the courts. The family filed a lawsuit on the day of the son’s death but the case has not progressed at all since then.

“I still haven’t managed to get the results of the autopsy for my son Carlos,” Bejarano wrote on Twitter. “I have called the court in Seville and on the last call they said they don’t have it either. It’s very strange… What are they hiding?”

Speaking to Spanish newspaper El País, Bejarano explained that his son had come home that day exhibiting aggressive behaviour. Carlos was a drug user, his father added, and had consumed cocaine before the incident in question.

His parents had called the police given the situation. “When the officers arrived, my son was already out of the house, but he was still agitated and he assaulted the officers,” he told the newspaper.

The civil guards then used their extendable batons to neutralise him, and managed to get him onto the ground. “They compressed his neck and throat in such a way that Carlos went into cardiorespiratory arrest and was kept alive in intensive care […],” he said.

Carlos’s parents have also denounced the fact that medical assistance took too long to arrive after it was requested by the Civil Guard, and that when it arrived it was lacking the equipment necessary for the nature of the emergency.

“Let us hope that this serves to avoid it happening again and that they clean up the security forces,” Bejarano wrote in a tweet accompanying the videos he shared of the incident.