EVEN the Spanish look somewhat sceptical when I tell them I’m leaving the heat of Malaga for yet another trip to Galicia.

‘It’s wet and cold there,’ they say. Well it is true that Galicia is very different from the parts of Spain that most of us know but, to my mind, the benefits far outweigh the difference in climate.Since I first became an expatriate in Spain many years ago, I have been systematically working my way around the Iberian Peninsula. But for years I completely ignored the rugged north-west corner. Now it alarms and upsets me that I didn’t get to know it sooner.

Galicia boasts one the world’s holiest sites in Santiago de Compostela, has some of Spain’s most dramatically wild and rugged beaches and tremendous food and wine.

Now thanks to generous folk in Brussels it is remarkably easy to get there, and tourism has opened up for the region, from where former dictator General Franco heralded.

Even better the Galician authorities are hell bent on avoiding the appalling over-development that has ruined much of Andalucia. They are protecting a lot of their coastline and their ‘turismo rural’ programme gives you access, rather like the French gite system, to over 500 privately-run homes the length and breadth of the region.

It is a great way to get to meet the locals, the people best placed to advise you what to see and where to eat.

I start my four day trip in Barbanza, a couple of hours drive south of Santiago de Compostela. Here, the ‘Ria Arousa’, the tidal Arousa River, with its clean water, produces more mussels than anywhere else in the world.

It is only after I stop off to admire the view and take some photographs that I realise that the young man at Europcar hasn’t bothered to tell me that I need to have my clutch flat on the floor to re-start my Toyota Yaris.

The Casa Insuela is at Palmeira in the south of Barbanza. Run by Alejandro Gonzalez and his wife, Loli, it offers me the perfect base for a couple of nights. The view from my window across the mussel beds from their cliff-top home is breathtaking.

The Galicians are a totally different type of folk to their Moorish-influenced cousins from Andalucia. The Gallegans’ roots are more Celtic, their skin is pale and they are a lot less Latin in attitude and culture than their counterparts down south. (Yes, that means a lot less noisy!)

Nowhere is the Celtic heritage more visible than at the Hill-fort at Baroña. Yet this outstandingly well-preserved ancient settlement is easy to miss, with hardly any signposting from the coastal road.

Delightfully, even in mid-summer, I am the sole visitor and the only sound is the roar of the Atlantic swell crashing against the rocks, the wind rustling through the trees and the piercing shriek of the seagulls.

Locals suggest a good luncheon spot; and again the venue is completely unsigned from the main road. It is an entirely Spanish clientele at what appears to be the only restaurant for miles around. We appreciate not only some excellent home-cooking, but at seven euros each including wine, it is a price almost as spectacular as the scenery. 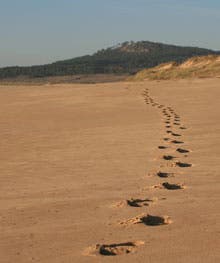 I spend the afternoon pottering about at the wonderful beach at the Carregal and Vixan lagoons natural park.

Again, I am almost the only person about, the vast beach stretching for mile after mile around the completely unspoiled and undeveloped bay. The Corrubedo sand dunes are unbelievably vast, deep enough, they say, to bury two-thirds of Santiago de Compostela’s famous cathedral

Throughout my first day, I have this strange feeling of being so terribly much at home. A feeling that I always get in Galicia. The landscape, the forests, the hills, the vast white sands. It feels so terribly much like western Scotland – but in the sunshine and without midges!

You only have to listen to Galician music, that of bands like Milladoiro or Carlos Nunez, to realise just how strong the Celtic roots of Gallegans are.

The journey north looks far on the map, but is covered, for the most part, by an almost deserted toll motorway. I am soon in San Sadurnino, almost within touching distance of the Biscay coast.

The journey north shows just how agricultural this part of Spain is, the countryside predominantly green, with plenty of tractors driving around.

Staying this far north (at Casa Outeiro, which has its own restaurant) allows exploration of the area between Cedeira and Cariño, where Europe’s highest cliffs are to be found. Stopping off en-route for coffee, we discover that the big news in the village is that a house has been bought ‘by an English family’. The gossip underlining just how few Brits have settled here.

The cliffs are most impressive. But the lack of decent signposts means it takes a lot of guesswork to find the road to take us there. On the plus side we have the road almost to ourselves and it’s easy to potter along at our own pace, stopping every few minutes when yet another stunning picture opportunity hoves into view.

Unusually for me, I have so far not mentioned much about the food. Galicia is often said to have some of the best cuisine in Spain and I have no reason to dispute that.

In Cariño, we eat in a locally-recommended restaurant, where presentation is easily matched by the quality of a top Michelin-starred joint, but with a fraction of the prices.

Less than an hour away is Ortigueira, which sells itself as ‘The Pearl of the High Rivers.’

Sensitively developed with a lot of pedestrianised areas and parkland, I muse what the atmosphere must be like when they hold their big Celtic music festival in July, when 100,000 people descend on the little town. So important is the Celtic music tradition, that there is even a statue of a bagpiper overlooking the port.

Driving back across the hills to our temporary home, we happen across the most enormous wind farm I have ever seen. Sails barely turning in the light breeze, I wonder just how bleak this perfect place becomes in the winter months of the Atlantic storms.

But, although my friends have warned me to bring my brolly and my jumper, neither has been unpacked and Galicia has, once again, worked its magic.