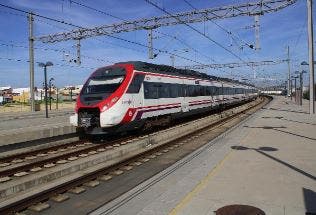 ALMOST 350 passengers were stuck for five hours on a broken down train travelling from Madrid to Alicante.

The train was static from 6.05pm to 11pm in the Cuenca area on Thursday.

Passengers finally got off the train at 11.40pm when the faulty vehicle was towed to Fernando Zobel station in Cuenca, still a long way from their final destination.

It took around five hours for the issue with the train to be resolved and for the passengers to continue on their way to Alicante.

At least two travellers missed flights they were due to take from Alicante Airport due to the issue.

The shop on the coach reportedly had no food or water and passengers were not able to use the bathroom.

Maria Casas who was on board during the ordeal said online: “The AVE Madrid-Alicante which I was travelling on, has broken down, and we have been stopped for four hours in the middle of nowhere without any solution being given.

Now they have left us in the dark and with the air conditioning on full blast, they are refusing to open the doors and people are fainting.”