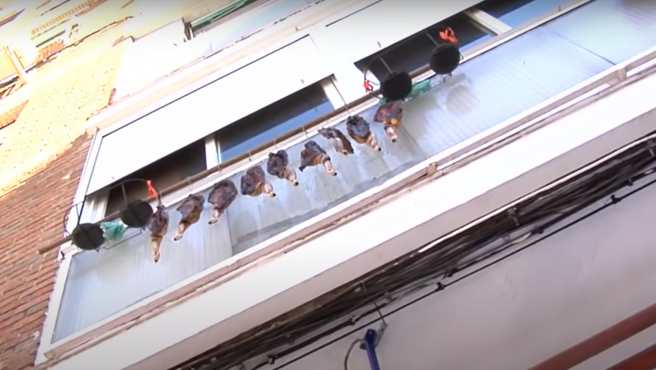 A RESIDENT in the Madrid neighbourhood of La Concepcion has become a local ‘cause celebre’ after attracting attention for choosing to hang hunks of meat from his washing rail in a bid to preserve them according to Spanish tradition.

Walk into any traditional style eatery in Spain and you will likely find legs of jamon serrano hanging from hooks above the bar, a practice that goes unremarked upon except perhaps by visiting vegetarian tourists.

But when a neighbour in a block of flats in Madrid opted to use his first floor window to hang out cuts of meat to cure in the open air, it caused quite a stir.

In fact, it even made a slot on the local television network after one neighbour was so disgusted at the ‘unhygenic’ practice that they called on TeleMadrid to investigate.

TeleMadrid dispatched a reporter and cameraman to Calle Virgen de África to ask passers-by what they thought of the bizarre sight and to try and identify the meat.

“It looks like chicken,” said one. “They have been hanging there all week and it is very unhealthy indeed”.

“Eat that and you’ll be going to the hospital,” said another.

“It’s gross. I don’t know if they are pieces of chicken or duck but it’s disgusting,” said another after staring up at the dangling flesh from the pavement. “They should be forced to take it down, it’s a health hazard.”

The television team were however, unable to locate those responsible for causing such a controversy, or confirm whether it was chicken or duck.

EYEWITNESS: The Olive Press sent Heather Galloway to investigate Madrid’s San Cristobal neighbourhood, where a machete-wielding homeless man was gunned down by police