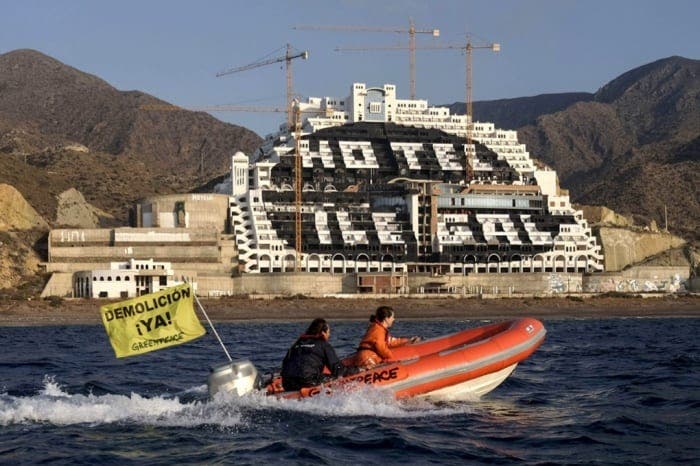 THE DAYS of the notorious hotel built on the beach at El Algarrobico, in Spain’s Almeria province, are numbered. But despite all of the court rulings that have found the construction to be illegal, the demolition will still have to wait.

The Supreme Court today ruled against an appeal filed by environmental group Greenpeace, and found that the structure can still not be knocked down. The reason? The building licence, which was first issued in 2003, is still in force.

The hotel in El Algarrobico, which has never seen a single guest, has become a symbol of the rampant construction on Spain’s coasts during the real estate boom years at the start of the 21st century.

The construction work was halted by a judge in 2006, when the project was practically finished. Since then, around 50 different court rulings have found that the hotel was illegal: it encroaches 100 metres onto public beach land, it is in an area of the Cabo de Gata-Níjar natural park where construction is prohibited, and the land itself actually belongs to the Andalusian regional government.

In fact, it is this complicated web of different lawsuits that has made it so difficult to demolish the structure. In 2011, the central and regional governments agreed to a joint plan to knock it down, but since then they have both argued that until all of the litigation is settled, this cannot go ahead.

This is exactly what the Supreme Court has just concluded too, according to Spanish daily El Pais. In a ruling that will be made public in the coming days, the top tribunal has found that until the building licence is rescinded by the local council, the demolition must wait.

The Andalusian High Court last year called on the local council in Carboneras – which is run by the Socialist Party – to review the licence on the basis it might be null and void. But the council is yet to do so despite requests from the courts and environmental groups.

Despite this latest setback, Greenpeace is planning to continue to pressure the Carboneras council to cancel the licence and will also call for the Andalusian High Court to take disciplinary action against the mayor for the inaction.

Once all of these legal hurdles are finally cleared, the plan to knock the hotel down can finally go ahead. A study drawn up in 2012 by a public company estimated that the cost of the demolition would be €7.2 million. But given that this was an estimate made 10 years ago, the final bill is likely to be much higher.