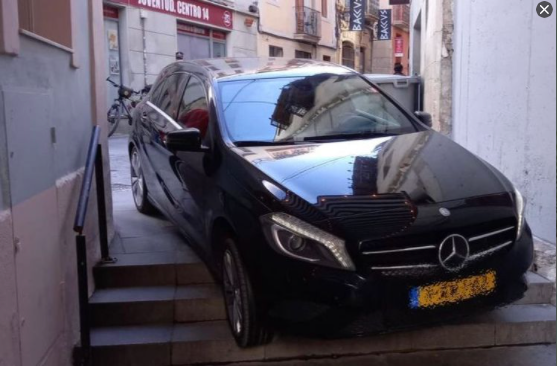 A TOURIST has been fined after a foreign-plated car got trapped on a tight staircase in Alicante city centre.

Unable to reverse out, the car with EU plates was photographed with its front wheels in mid-air over a staircase in Alicante’s old quarter (casco antiguo).

The warren-like streets are in fact prohibited to entry (except for residents or authorised vehicles) but the tourist claimed to police they were just following their ‘GPS’.

“You have arrived at your destination,” the voice of the GPS reportedly said, in a ‘feminine voice’.

The tourist needed assistance to get out of the trapped car due to the narrow street in which the car had ended up.

Policia Local arrived to assist, before fining the driver for entering the old quarter without authorisation.

The driver claimed that due to language problems warnings prohibiting entry to non-residents were ignored.