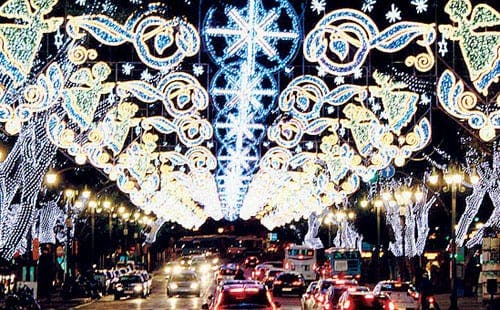 THE Malaga Christmas lights, one of the highlights of the festive period, are almost all ready for this year’s festive switch-on.

Malaga is in the final preparations of the city’s festive illuminations, to be switched this Saturday, November 26 at 7pm.

The city council are putting the final touches to the ‘Heavenly Angels,’ which are now flying high over Calle Larios, as well as the installation of Christmas lights in some 500 streets, squares and roundabouts throughout the capital of the Costa del Sol.

After four years of Malaga’s ‘Enchanted Forest’ at Christmas, Malaga’s most emblematic street has been decorated with celestial angels.

The angels are four metres tall with 12-metre trains, and will keep watch over Calle Larios this Christmas.

The Malaga-born singer Vanesa Martín will be in charge of ‘pressing the button’ to illuminate Malaga centre with the stunning Christmas lighting—including the 16 angels supported by 32 lateral columns—at 7pm.

From Saturday onwards, the lights will be on between 6:30pm to midnight on weekdays, while on weekends and the eve of public holidays they will remain on until 2am.