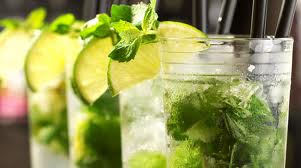 IT’S still summer and sizzling hot in Southern Spain and though that means it’s still time for frosty cocktails and outdoor bars, you’d be surprised how much sugar content a bit of ice can float in.

High temperatures mean that good hydration is essential to keep our bodies functioning in a healthy way and is the basis for the prevention of many illnesses, what’s more, there is an infinite variety of drinks on the market, although not all drinks contain the same nutritional content and on many occasions we don’t even know what these liquids contain, or is they are, in fact, as healthy as they’re made out to be.

The Olive Press checks out the four most consumed summer drinks in Spain, with the highest calorie intake for our cuerpo serrano.

One of the star drinks of the summer, a classic mojito cocktail usually lands around 240 calories each, the good news is that with its mixture of lime juice and mint leaves, it does have Vitamin C present and may give you healthy digestion.

The classic Valencian drink par excellence, though it is estimated at 100 kcal per 100g and contains about 12% sugar. It is highly diuretic and energetic and a popular drink after exercise, often referred to as ‘the drink of the gods.’ containing more iron, magnesium and carbohydrates than milk.

These are icy-cold, semi-frozen drinks, which go down a treat under the sizzling Spanish sun, available in many flavours, however, fruit is found in a minimal percentage while sugar can account for up to 12% of the drink’s total intake with each glass containing up to 200 kcal.

One of the alternatives for beer drinkers, consisting of half lemon soda and half beer, basically a shandy–local light beer diluted with either sweetened club soda (clara) or lemon Fanta (clara con limon).

Claras are light, refreshing, and perfect for keeping you cool without losing your cool, but because it contains this fizzy drink it also contains twice as many calories, about 125 kcal per 330 mililitros.

Ten of the most desirable and expensive delicacies produced in Spain