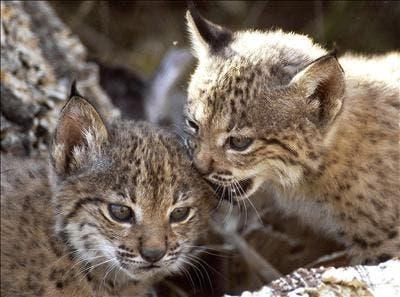 AN Iberian lynx and her two cubs, between five and six months old, have been run over and killed on the JA-6104 road in two separate and tragic road accidents.

As reported by the Centre for the Recovery of Endangered Species (CREA), the authorities received a phone call at around 9.50 a.m on Thursday, August 26, from an individual alerting them to the presence of two dead lynx cubs, lying side by side, between the towns of Vilches and Linares in Jaen.

Specifically, four kilometres from the Vadollano crossroads, an area where there is a great presence of this protected species.

Members of the CREA, together with the Policia Local and the Guardia Civil, confirmed the death of the two animals.

According to a spokesperson from the Guardia Civil, though the incident appears to be ‘accidental’ with no signs of a criminal offence such as poisoning or bullet wounds, the two corpses will undergo the corresponding necropsy to confirm the cause of death.

“The necropsy will be carried out by the Andalucian Wildlife Analysis and Diagnosis Center (CAD) and if the findings show that the cubs had been poisoned, an investigation would be initiated,” the spokesperson added.

The fine for intentionally killing a lynx ranges from €4,200 euros in Madrid to €60,000 in Andalucia and €90,000 in Extremadura and Castilla-La Mancha.

Tragically, five days later, on August 31, the corpse of a female adult lynx was also found on the same JA-6104 road.

The female lynx was wearing a GPS tracker which has allowed members of the CREA to confirm that it was the mother of the two cubs, with every indication that she was looking for her kittens.

The CREA together with the Iberian Society for the Study and Conservation of Ecosystems (SIECE) has called for action protocols to be put in place to prevent these deaths on Spanish roads.

In fact, road accidents are the primary cause of Iberian lynx mortality, and represent an important threat to the population of the species, as does low genetic diversity and the availability of prey with a decrease in the rabbit population—a crucial resource for lynx survival.

The Iberian lynx isn’t the only species considered vulnerable in Spain, the population of the Cantabrian brown bear diminished to just 80 in the 1960s. The current population is estimated at 350.

The Spanish Imperial eagle has also seen a recovery from a scarce 60 in the 1960s to some 400 in recent years, though the eagle is still vulnerable to hunting, deforestation and chemical contamination.