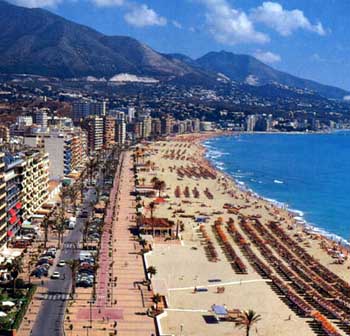 POLICE have arrested a young French man over the death of a cyclist who was hit by a car on Fuengirola’s seafront on Monday evening (August 16).

The 20-year-old Frenchman was driving a Mercedes with Polish registration plates along the Paseo Maritimo Rey de España in the busy resort town on the Costa del Sol when he lost control of the car.

The cyclist has been identified as a 41 year-old man from Cordoba visiting the town on a family holiday.

Witnesses described how the car hit a curb and ploughed into the cyclist before landing upside down on top of another car. The driver and two other occupants were not injured.

Three other vehicles were also damaged as well as street furniture and a palm tree.

Police arrived on the scene at 8.50pm and the driver tested negative for alcohol but initial investigations suggest that he “far” exceeded the 30km speed limit.

Fuengirola Town Hall conveyed condolences to the family of the cyclist.

“This incident is solely attributable to the conduct of the person behind the wheel of the vehicle causing the accident, as the first investigations indicate that it greatly exceeded the maximum speed allowed,” Fuengirola Town Hall wrote on its Facebook page.

“The Town Hall and the local police will spare no effort bringing the perpetrator of this criminal act to face justice for this terrible event, which has cost the life of a person and has caused tremendous pain to their families and friends,” the statement ended.