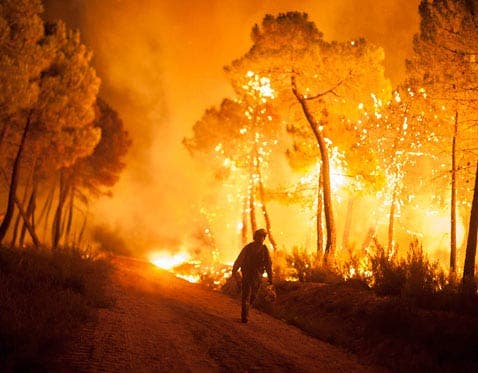 A FIREFIGHTER has tragically died after becoming trapped when helping to fight the ferocious blaze that is sweeping across Sierra Bermeja, in the Costa del Sol.

The blaze, which started just before 10pm on Wednesday night and has so far affected 2,200 hectares and caused 1,000 people to be evacuated from their homes, has now claimed the life of an experienced firefighter from Almeria.

“He died in the line of duty for the Andalucian people”, said Carmen Crespo, Minister of Agriculture, Livestock, Fisheries and Sustainable Development, who offered her ‘deepest condolences’ to his family, his colleagues at the checkpoint and all those who are part of Infoca.

“If it was arson, the perpetrator must be punished under the full weight of the law,” she added.

Junta chief, Juanma Moreno, has also sent his condolences to the firefighter’s family “It is a huge disgrace”, he said on social media, adding: “my hug to his family and his colleagues.”

The Government delegate in Andalucia, Pedro Fernandez, has indicated that the incident was a ‘sad and tragic day in Andalucia.’

Some 250 firefighters have continued to work throughout the night on the steep terrain, full of peaks and valleys, in an attempt to keep the fire within a perimeter of more than 2,000 hectares between the municipalities of Genalguacil, to the west, and BenahavIs, to the southeast.

The preventive evacuation of Selwo due to the fire in Sierra Bermeja has also taken place, affecting 370 people, including visitors to the zoo and those staying in the cabin area.

The nature reserve located in Estepona has announced that it will remain closed as a precautionary measure until further notice.