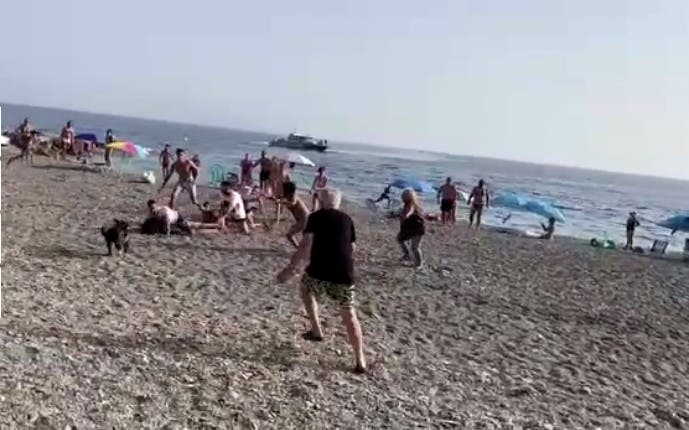 BEACHGOERS at a playa south of Granada in southern Spain had a peaceful afternoon at the beach rudely interrupted on Saturday when they found themselves in the middle of a dramatic police chase.

It started with the buzz of a police launch in pursuit of a vessel suspected of being used to traffic drugs into Spain just off the coast of Playa Melicena in the town of Sorvilan, southern Andalucia.

As the police moved in, the traffickers took the decision to run their boat into shore, knocking one bather to the sand, and jump from its deck to make a run for it.

But the suspects hadn’t counted on resistance from the general public who  rushed towards the two men and tried to slow them down.

Video footage showed one suspect being tackled by a man in his swimming trunks, and as he tried to get to his feet a woman in a bikini gave him a shove.

The crowd converged on him to keep him in the sand until officers arrived.

The two suspects, aged 43 and 32, were detained by officers from the Guardia Civil and a search of their boat revealed a stash of hashish weighing 800 kg with an estimated street value around €1.5 million.

A police association thanked the brave actions of those on the beach: “Thanks to all, because without you it would not be possible.”

Another wrote: “When they talk about the honourable and brave Spanish people: Here it is.”