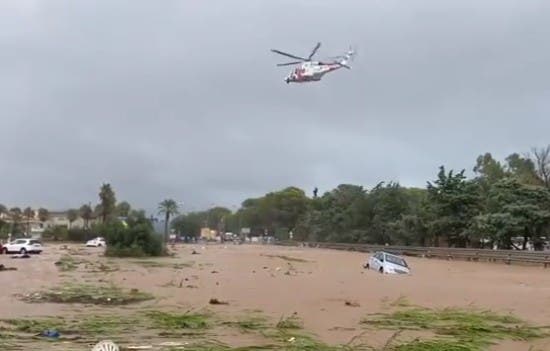 Spain has been dealing with the aftermath of some of the worst summer rain storms to hit the peninsula in decades.

The big clear up has been underway since weather conditions midweek in parts of central and eastern Spain caused heavy downpours triggering flash floods that destroyed homes and local businesses.

Many homes were left without electricity and roads and rail-links were closed due to flooding which saw cars dragged into the sea.

Many parts of Spain were hit badly but the provinces of Castellón, Tarragona on the Spain’s eastern Mediterranean coast and Toledo in central Spain were particularly affected.

Despite the devastating effects of the flooding there were no directly related casualties.

Alcanar in the northeastern region of Catalunya, was one of the worst affected by the floods. It saw more than half the usual annual rainfall of the zone in just one day on  Wednesday, September 1,when the area saw 252mm in three hours.

This rainfall quickly turned into a deluge that entered houses and moved trees and cars out to sea.

Emergency services had to rescue many people from their vehicles and campsites. Rosa María Sancho, 67, Alcanar local restaurant owner said “We had to get upstairs to our apartment and then leave it all in God’s hands”.

The Catalan government is considering declaring the worst affected zones as ‘disaster areas’, which would make towns eligible for additional resources.

Guadamur in the Toledo province experienced similar devastation at the hands of flash floods.

The mayor, María del Sagrario Gutiérrez, was overcome with emotion as she spoke about the 200 homes that had been devastated.

“What took 15 years to develop was demolished in an hour for a village of 1,800 people. I was born and raised in this town, and I’d never seen anything quite like it,” she told Spanish media.

Over the past few days much of the community has been volunteering including children.

Madrid was also hit by the increased rainfall that managed to flood people’s homes and create pockets of water on roads. Rubén del Campo, the Aemet spokesperson said that August 31  has been the second rainiest day in August for Madrid since 1920.

Pedralba in Valencia was also affected. A couple had to be rescued from their car by firefighters as it had been dragged away by the rains.

??And so to were areas of Murcia.

This unnatural increase in storms and rainfall and longer droughts that Spain are experiencing are undeniably linked to climate change, insists Aemet.