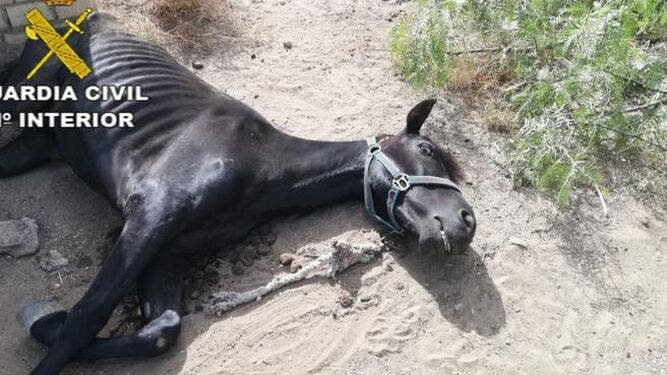 A WOMAN is under investigation for the poor conditions in which she kept her horse in the Sevillian municipality of Lebrija.

According to a press release issued by the Guardia Civil’s Nature Protection Service (SEPRONA) the owner of a horse is being investigated for animal abuse after her horse was found in ‘deplorable hygienic-sanitary’ conditions and ‘unable to physically stand up’.

The investigation was launched on August 10 when SEPRONA were informed of the existence of a horse reported to be living ‘in poor condition’, on a plot on an urbanisation called Cuzco I, in Los Palacios y Villafranca.

Upon inspection of the area, the officers discovered a mestizo equine, lying on the ground, in dire conditions.

An equine veterinarian was called to ‘urgently’ assist the horse as the officers feared for its physical integrity, ‘aggravated by the high temperatures’.

On arrival, the vet administered ‘fluid therapy with serum and analgesics’ to the animal, and managed to stabilise it.

The horse was then placed in the hands of the Fundacion Caballos en Peligro España (a foundation for horses in danger in Spain) who proceeded to carry out the rescue of the animal and transferred it to its facilities for veterinary treatment and proper care.

Meanwhile, the Guardia Civil has sent the police proceedings to the Environmental Prosecutor’s Office in Sevilla.