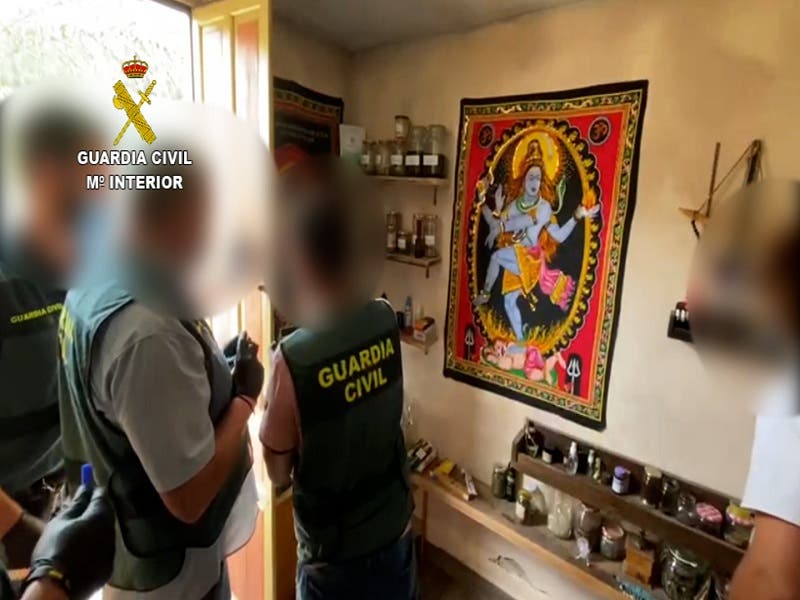 A COUPLE have been arrested in Callosa de Segura, inland from the Costa Blanca in Spain’s Alicante province after posting videos of their weekend retreats on social media.

The husband and wife team offered ceremonies that used banned psychotropic substances to induce a ‘spiritual experience’ for which they charged guests between €75 and €150 a session or up to €350 for an entire weekend.

Spain’s Guardia Civil said they arrested the man and woman, aged 42 and 38 after analysing videos they posted on their social media sites to advertise their services.

“Clients were observed consuming in liquid form or inhaling psychotropics given to them by him [the master of the ceremonies] while she obstructed their breathing in order to retain the smoke inside of them for longer,” said the Guardia Civil in a statement. “As a consequence of this practice, clients would fall to the ground with convulsions and show serious alterations of consciousness.”

Raids on their home and at the headquarters of the association they found in 2019 resulted in the discovery of 97 substances that contravene the 1971 United Nations convention on psychotropic substances including ayahuasca, a plant concoction that contains the natural hallucinogen known as DMT.

Locked in safe in the bedroom, officers discovered samples of venom from the Bufo alvarius, a toad that lives in Mexico’s Sonoran desert that secretes a powerful psychedelic serum often used in shamanic ceremonies.

Other banned substances included the mushroom Amanita muscaria, and ibogaine, a drug from a plant that grows in the rainforests of Gabon, which the couple used in ceremonies billed as “international ancestral medicine”

The popularity of such ceremonies led by a so-called Shaman, has grown among those looking for ‘a spiritual awakening’ as some claim the hallucinations provide mental clarity and spiritual insight.

However, the police warned of the dangers. The couple “did not possess any professional qualifications or training” that could allow them to supply psychoactive or hallucinogenic substances “that could represent a serious threat to health”.

The pair, who have not been named by police, have been charged with violating public health laws.