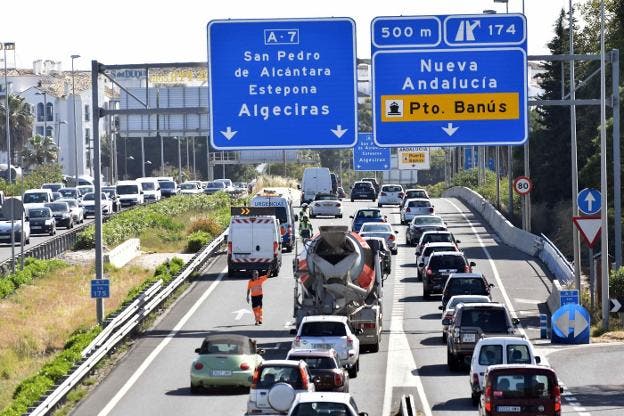 DAY trippers have added to the regular summer holiday traffic on the Costa del Sol this weekend—leading to tailbacks tallying some 21 kilometres with painfully slow-moving traffic on Sunday.

The main congestion was on the toll-free motorway A-7, between 7:45pm and 8:15pm, which became completely saturated by a huge number of vehicles at three different points; between kilometre 254 to 259, heading towards Cadiz; six kilometre tailbacks were reached in Fuengirola, between kilometre 207 to 201 towards Mijas and on the western side of the coast, traffic was also heavy as it passed through Marbella, from kilometre 187 to 192.

According to the Department of Traffic (DGT), the caravan of vehicles was mainly due to Sunday beachgoers who had spent the day at the seaside and headed back home on the roads in the evening.

The DGT has estimated 91.2 million journeys—similar numbers to the 2019 summer campaign—taking place during the months of July and August, with a very significant increase in weekend trips and short journeys.

For the time being, these forecasts are being met and are proof of the fewer mobility restrictions imposed by the authorities this summer compared to last year’s summer season.

The A-7 is by and large, a very busy highway with high density traffic regardless of the day or season, due to the fact of being located directly on the coast and linking all coastal municipalities, being the old national road, there are many areas with just two lanes and narrow curves that force vehicles to slow down to 80 km/h.