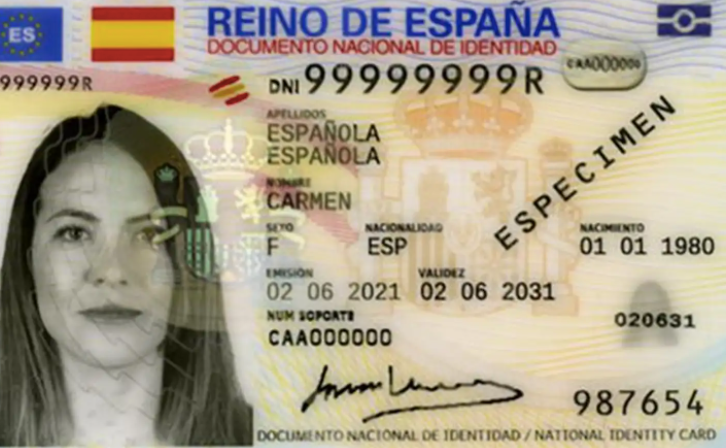 THE first of the new National Identity Documents, known as DNI 4.0, have been handed out today.

The ID card,, which will be mandatory throughout the European Union, will include the fingerprint and the face of the citizen.

The arrival of this new document does not mean that the old ones are no longer valid, but anyone renewing their DNI will be given the new card.

The new National Identity Document will have a validity period of between five and ten years and is the same size as the current one, at 85.60 x 53.98 mm, although it includes some modifications.

Modifications of the new DNI

Your ID, on your mobile

Another advantage that DNI 4.0 offers is that it can be registered on the user’s mobile phone. It can be used in official applications both in Spain and in the European Union and will allow citizens to stop physically carrying the document and even use the online function to book appointments and pay taxes or fines.

The Minister of the Interior, Fernando Grande-Marlaska, announced that this new DNI is part of the DNIE Digital Identity Program of the National Police and has been financed with the resources that the Spanish Government has acquired from European funds. According to Grande-Marlaska, the 25 million euros project means `the new documents can be used by all Spaniards, so that they can benefit from the opportunities offered by improved technologies.”

It is expected that the Government of Pedro Sánchez will implement the express DNI in the coming months. That is a system for issuing the semi-automatic National Identity Document that speeds up the process and reduces waiting times for its renewal.