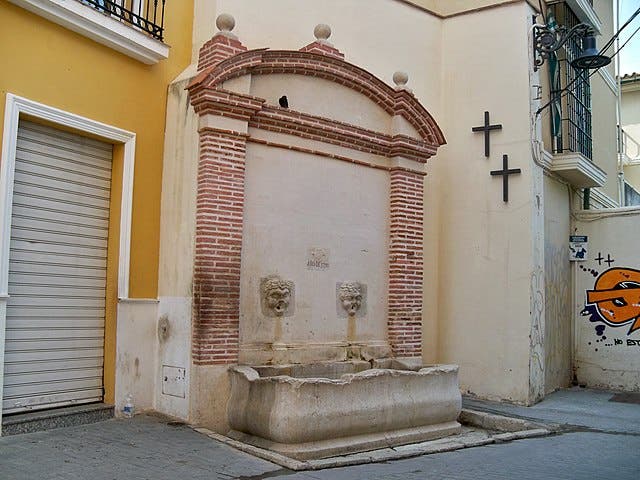 A HISTORIC fountain, dating from 1790 in the historic centre of Malaga capital, has been used as an impromptu bathtub.

A man in Spain has been captured on camera bathing in the Fuente Los Cristos, a long-standing fountain located next to Ollerias in Malaga.

The image shows a man, inside the fountain taking a shower, dripping suds into the drinking water, but at least with the decency of wearing Speedo-style swim trunks.

The image circulated on social media and has triggered various comments, many of which slam the fountain user.

“This cannot be allowed. We need quality tourism.” said one twitter user.

“There is even a queue…” another social media user points out.

The Fuente Los Cristos fountain is located in an alleyway in Ollerias and was restored by Malaga City Council between 2016 and 2017, as part of a project to restore several of these architectural elements scattered around the city.

The fountain, constructed in Calle de los Cristos, is attached to the back walls of the San Luis el Real convent of the Franciscan order.

It was this community that paid for the construction of the fountain in 1790 which is reflected by a stone plaque on the fountain that bears the year of construction and the five marks of stigma bore by Saint Francis of Assisi, the symbol of the order.

The design of the fountain is attributed to the architect Jose Martin de Aldehuela.