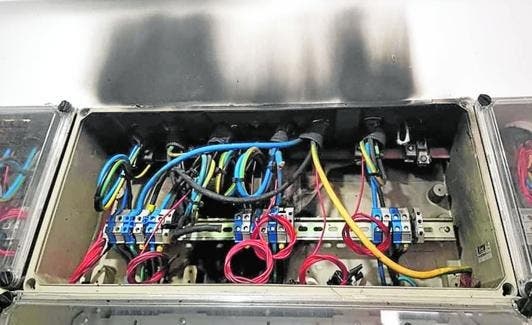 Residents lost power on Tuesday, November 9, at 11 pm during a cold spell and called the authorities to reconnect the supply. Firefighters, the National Police and the company in charge of the electricity supply went to Solidaridad Street in the Espiritu Santo neighbourhood to see if it was the same cause as previously investigated.

On arrival at the address, a collection of electricity meters situated next to a social housing building had burned out again. Technicians said the fault was due to the illegal hookups to the grid- the stolen energy being used to heat indoor marijuana crops.

A neighbour in the area, who prefered to remain anonymous, said that not all the people in the neighbourhood cheat and honest and hardworking people live in the building, including two couples with children and elderly people. The neighbour said that they were alarmed when they saw the smoke and smelt the burning- which was caused by an illegal power connection to a flat in the building.

Reporting the problem can lead to reprisals from drug traffickers and it is not comfortable to live in a neighbourhood with this stigma, said the neighbour, adding that it is even less comfortable to suffer recurrent blackouts due to this criminal activity.

The incident on Tuesday caused a failure in a medium voltage line which took an hour to resolve. The electricity supply company said that it has been called out on more than 150 occasions throughout the year – practically once every two days, on average – due to breakdowns caused by the hookups.

“The power cuts due to the consumption by the ‘narcopisos’ (drug flats) are one of the problems of the neighbourhood,” said the new President of Espinardo, José Moreno, during his inauguration speech in his inaugural speech a month ago.

The National Police anti-drug macro-gang dismantled a dozen marijuana greenhouses in the area ten days ago and arrested eight people in the early morning raid. Many of the illegal plantations, according to the neighbours, are in social housing units owned by the Murcia City Council.