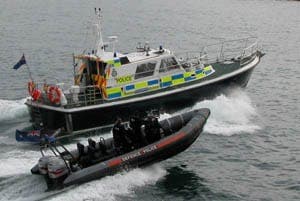 A JURY in Gibraltar has found four Spanish men caught with £11 million of hashish in local waters NOT guilty of importing the illegal drug.

The four had, however, earlier pleaded guilty to being in possession of the two tons of cannabis resin, for which they could go to prison for up to five years.

Chief Justice Anthony Dudley also found them not guilty of importing the illegal 12-metre RHIB they were travelling on.

They damaged a Customs boat in 2021 as they tried to flee before being arrested.

GBC News reported how prosecutor Christian Rocca told the jury the operation had been carefully planned and executed.

Rocca claimed they knew they had cross into British Gibraltar’s territorial waters.

But defence lawyer Christopher Finch managed to convince the jury that much larger forces had exploited the accused for their own ends.

Otherwise, Finch said a court could view a sailing boat passing through the bay as an importation.