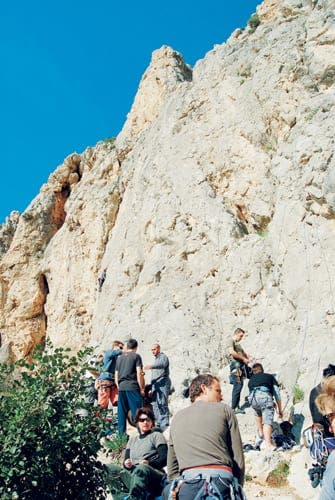 MOUNTAIN rescue teams recovered the body of a man who fell 60 metres to his death while rock climbing in Spain’s Andalucia.

The Greim mountain rescue and intervention group found the lifeless body on the ledge of popular climbing spot El Chorro, located in the Alora municipality.

Emergency services first became aware of the accident when his climbing companion, who was unhurt, called the 112 emergency number at 3.40pm on Monday.

The pair had been climbing the Arabian Stairway, or ‘Escalera Arabe’.

Immediately, the Guardia Civil called in the Greim mountain rescue team, sent a hospital to the area and alerted Malaga’s provincial fire service.

Rescuers took some time to get to the body because it landed in a difficult-to-reach ledge below the Arabian Stairway.

Greim units were only able to airlift his corpse out on Tuesday with the help of a helicopter.

Members of the rescue team also rescued the victim’s climbing companion, who did not need medical assistance.

In July 2019, another climber lost his life at El Chorro after he got caught on a rock and fell 200m to the bottom of the Gaitanes Gorge.