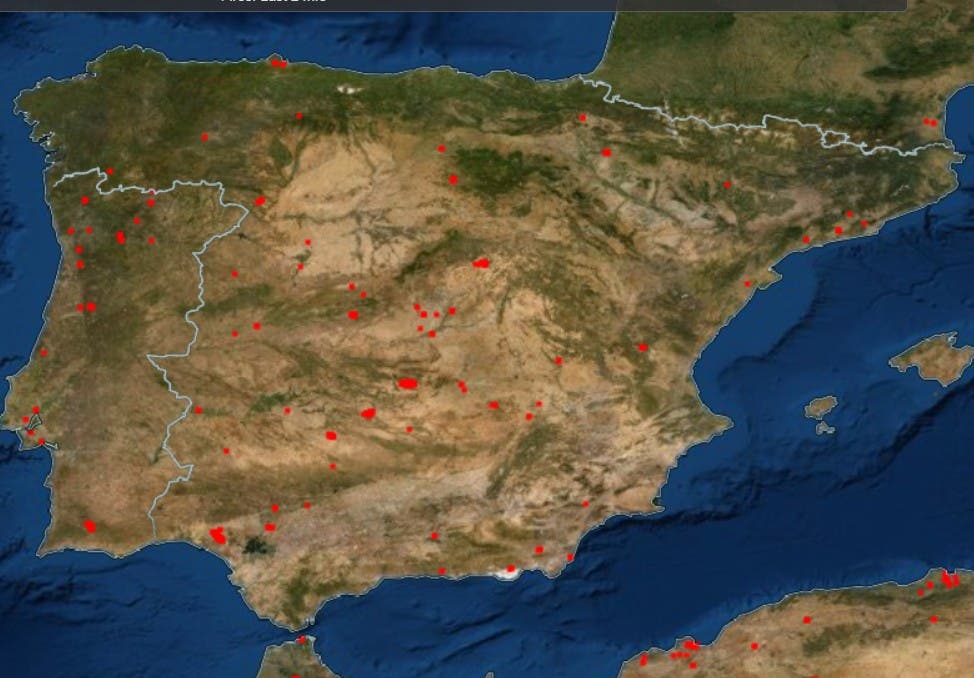 WILDFIRES are raging across Spain in what is already the worst year for blaze devastation in at least a decade.

A map produced by Nasa using satellite images from space is able to pinpoint in real time the burning areas of Spain.

While three huge fires continue to rage in Burgos, Zamora and Avila provinces of Castilla y Leon, new fires have broken out in Andalucia, Valencia and Castilla-La Mancha.

So far this summer more than close to 200,000 hectares has been scorched by flames according to the latest figures from Spain’s , European Forest Fire Information System (EFFIS) on July 22.

Since the start of the first heatwave which hit Spain on June 11, dozens of wildfires across 23 provinces have been battled by firefighters.

A forest fire raging across the Sierra de la Culebra in Zamora province, northwestern Spain in mid-June destroyed more than 30,000 hectares before it was brought under control, becoming the largest fire seen in Spain in twenty years.

Another fire broke out nearby in the province in mid-July, claiming the life of a firefighter and a shepherd and continues to burn.

Authorities warn that 95% of blazes are sparked by human action, whether deliberate or accidental often due to negligent behaviour.

The map above, courtesy of Nasa, shows all the active wildfires across Spain on Tuesday July 26. Or for live updates, click here.