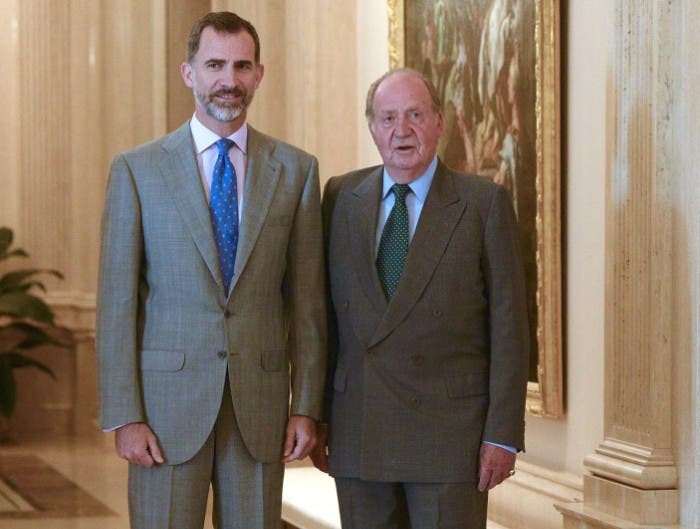 SPAIN’S King Felipe VI will coincide with his father, disgraced emeritus king Juan Carlos, at a reception in Buckingham Palace on Sunday. The pair, along with their wives, will all be travelling to the English capital for the funeral the next day of Queen Elizabeth II.

The presence of Juan Carlos at the event poses problems for the current monarch, given his efforts to distance the royal family from his father over recent years. Juan Carlos abdicated the throne in 2014 after a series of scandals about his private life, and then went into self-imposed exile in 2020 after yet more controversy – this time over his financial affairs.

Felipe has not been pictured with his father since early 2020, when they both attended the funeral of a relative. The announcement earlier this week that Juan Carlos and his estranged wife Queen Sofía had been invited to the funeral – they are both distant cousins of Queen Elizabeth II – caused a media storm of speculation in Spain as to whether he would actually attend.

By Monday evening it was confirmed that Juan Carlos would be going to the funeral, despite the central government’s clear displeasure.

Today, details of the official agenda were reported by Spanish media, showing that the two will coincide at the aforementioned reception and then at the funeral itself in Westminster Abbey. It is still not clear whether the two couples will be seated next to each other, but given their differing status and roles it is thought to be unlikely.

It has been confirmed that King Felipe and his wife Queen Letizia will stay at the Spanish embassy in London, while the self-styled emeritus king and queen will spend the night in a hotel.

The Spanish government will be represented at the funeral by Foreign Minister José Manuel Albares.