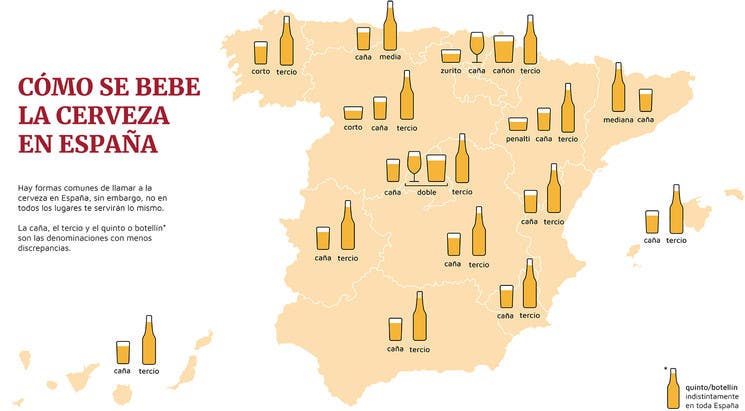 FOR many English speakers, the very first thing they learn how to do after landing in Spain is to order a beer.

While ‘una cerveza, por favor’ is certainly a good start, anyone who spends time beyond a brief holiday on the costas will know the issue is a lot more complicated than it first seems.

For those who have yet to master the difference between una caña, un doble, un tercio and a botellin, there is help at hand.

Spain’s Brewers Association has produced a map that not only shows the right words for different orders of beer, it also illustrates the regional differences you’ll discover if you travel to different parts of the country.

Probably the most common way to order a beer in Spain, una caña refers to a small glass of beer, usually under half a pint. It always refers to lager that comes on tap but the size does vary somewhat geographically. In Madrid it is usually a 200ml glass while in the Basque Country a caña comes in 350ml measure.

The beauty of a caña is that it is designed to be emptied before the beer has a chance to warm up.Something one seldom needs to worry about with a pint served in a British pub but becomes essential in the ferocious heat of a Madrid summer.

In some places across central and northern Spain, draught beer comes in even smaller servings that the Madrid sized caña. In Castilla y Leon, a serving between 100 and 140ml is called a corto while in Galicia, ask for un corto and you’ll get a caña size. But if you want a caña size in the Basque Country you best ask for un zurito and while in Aragon, order un penalti.

This is roughly double the size of a caña so usually around 400ml but don’t take this as a given. In the Basque Country to order 400ml serving you would need to order un cañón

So that’s draught beer dealt with, what about bottled? Again, it’s not straightforward.

A small bottle of beer, 200ml is usually called a botellin in most of the country but can also be described as un quinto, referring to the fact that it is a fifth of litre.

This refers to a larger bottle of beer, one that contains 330ml. This term is used across most of Spain but is also known as una media in Asturias and Cantabria and una mediana in Catalunya

Of course if you insist on ordering a large one, you can use the terms una pinta (for a pint) or una jarra, which is a bit of a gamble depending on the establishment.  It could mean a large tankard size glass of beer will arrive, or you might be served a jug full.

Once you have mastered the sizes, be aware of other options which include, ‘una cerveza sin’ (alcohol free beer) or una clara, which is a shandy made with a mix of lager and either fanta lemon or a sugary soda known as ‘gaseosa’.