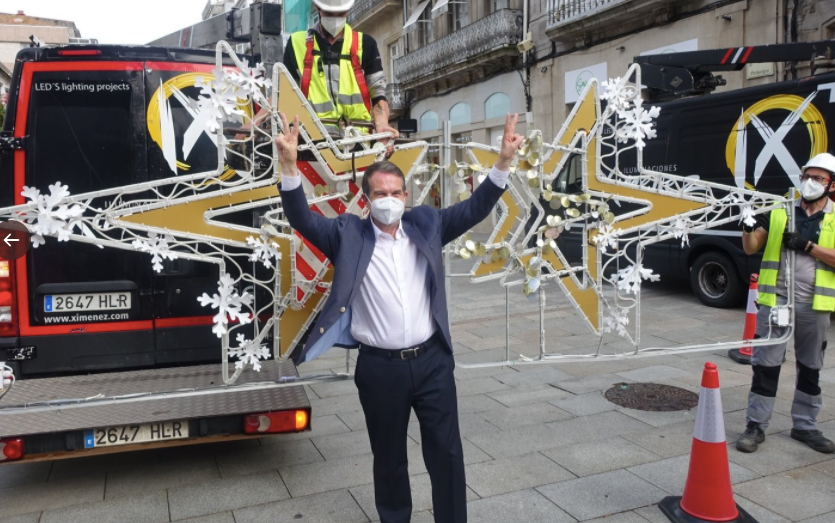 SUMMER may still be in full swing, but in the north of Spain, Christmas has already arrived.

The festivities have started early in Vigo in Galicia after the city began to string up its Christmas lights on Tuesday.

Mayor Abel Caballero said that they were committed to having the ‘best Christmas in the world’ as they put up the first of 11million led lights that they plan to install across Vigo.

The city council is putting lights in more than 350 streets and has ordered more than 1,000 trees – over double the amount of Christmas trees they had last year.

In 2020 the Christmas lighting covered 334 streets and boasted 450 trees with 2700 ornaments and ten million LED lights.

In an attempt to boost tourism to the area, the city has said this year will be ‘bigger and better than ever before’ and boasted that the display will be the greatest in the world, putting the likes of Manhattan in the USA to shame.

Caballero said: “New York will be too small for us. I’m not saying it, the people who will come to Vigo will say so.”

The city also plans to erect the tallest tree in the world, a ski slope and a gigantic Ferris wheel, which is normally one of the main attractions of the display.

Home to Europe’s largest fishing fleet, Vigo’s Christmas lights have been a great draw in previous years, with visitors arriving en masse for the switching on ceremony at the end of November.

“Whoever wants to go to heaven has to come to Christmas in Vigo,” said Caballero.

He added that all lighting is environmentally friendly, insisting that the 11 million lights switched on during November, December and January consume less than lighting the football pitch over one month.

The city’s budget for Christmas lighting is €1million, a ‘ridiculous budget compared to other cities’ Caballero added.