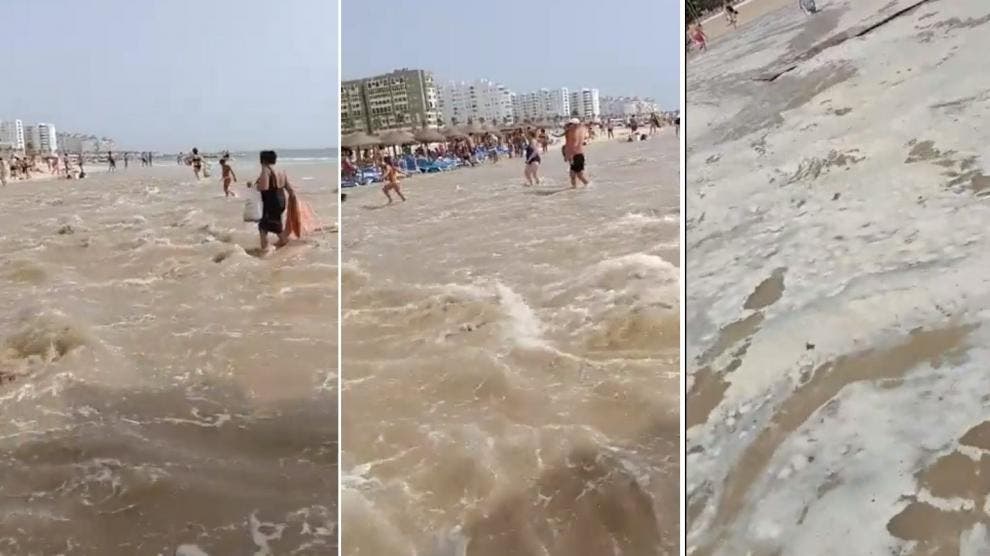 AN unusually fast and high tide sparked chaos at a crowded beach in Puerto de Santa Maria, Cadiz province of Andalucia, on Saturday when it rolled in and swept away towels and beach chairs.

Within a matter of a few minutes the water level rose significantly, surprising those who were having lunch in the crowded chiringuitos who had to run into the water to retrieve their stuff.

Video footage shows people scrambling around trying to collect items swept away in the currents including sun loungers and parasols and a wooden walkway laid out on the beach for easy access to the water.

Even the lifeguard viewing point was engulfed by the unusual tide at Valdelagrana beach, in what many dubbed ‘a mini tsunami’.

“I have been coming here for many years and this is not normal,” one bather told Spanish newspaper Nius Diario.

However, council authorities in El Puerto de Santa Maria issued a statement to reassure beachgoers that the phenomenon was caused by an unusually strong tide with the full moon, and ‘under no circumstances can it be considered a ‘mini-tsunami’.

“If that had been the case, it would have affected the entire Bay and the coast,” a statement issued on Sunday said.

A recent study by Unesco highlighted the threat of a tsunami on that stretch of coast, identifying the nearby town of Chipiona as one of the five zones at high risk of experiencing a tsunami within the next thirty years.

Spain has established an alert system to warn the public in the event of a tsunami that when activated would send out warnings to mobile phones in the designated area.