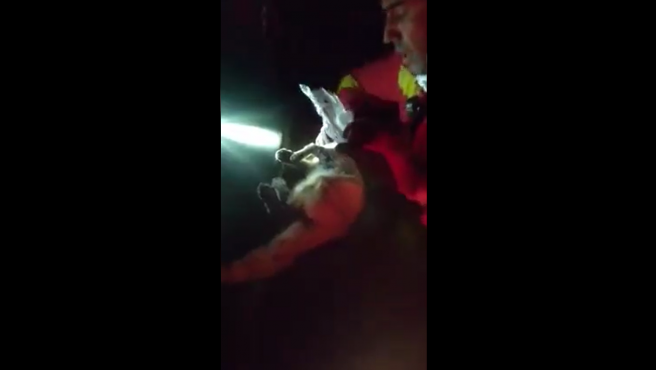 IT IS said that cats have nine lives, and this lucky feline on the island of La Palma certainly owes one of them to the soldier who came to its rescue after it was trapped by volcanic ash.

The cat was brought back from the brink of death after a soldier with an emergency rescue unit performed ‘mouth to mouth’.

The exhausted cat was pulled from a pile of volcanic ash by a team of rescuers from the UME unit on the island of La Palma.

A video uploaded by animal rescue charity Leales.org showed the man resuscitating the  animal using a tiny plastic filter to breathe into its airway.

The cat survived and was pictured recovering in a cage after the ordeal.

The charity has been raising money for the rescue and care of animals affected in the volcanic eruption on la Palma.

It raised awareness of the plight of three dogs which are trapped in an empty water storage tank surrounded by lava flows.

A daring rescue to save the animals by capturing them with a net and lifting them to safety using a drone has been given the green light.