FROM THE ARCHIVE: By Clive Muir and Sue Eatock

ANYONE who has a country property probably knows well the sticky footed lizards known as geckos. Happily living off bugs and flies, they spend their daytime in nooks and crannies waiting for the dark so that they can come out to feed.

But did you know that there are two different types and that the months of September and October are the best times to see the new hatchlings?

Tiny perfect copies of the parents that start out life on their own from the first moment they leave the egg. Be careful with the vacuum cleaner and keep an eye on the cat for it is a privilege to have this creature in your home.

These lizards are most active at night and have the ability to climb walls and even cling to ceilings. Their colouration can vary, but generally it is a camouflage pattern of browns, greens and greys with rough dorsal scales giving them a spiked appearance.

The body length can reach nine centimetres with the tail being equal to make a total of 18 cm. Often they are smaller than this and if the tail is damaged it may not be of equal length. As with most lizards, they have the ability to eject a section or all of the tail in order to confuse predators. While the disconnected tail still wriggles occupying the predator, the gecko has a chance to escape with its life and regenerate a new tail over the coming weeks.

They can live on rock faces, in trees, in log piles, drystone walls, barns and alongside people in dwellings.
Their food consists mainly of insects such as moths, beetles, caterpillars and spiders. They have adapted well to living next to humans as lights left on at night attract many moths which provide an ample food source.

Moorish geckos can be found through nearly all of Portugal and half of Spain, concentrated in the latter, mostly where there is a Mediterranean coastal influence on temperatures. They prefer warmth and so are rarely found in high mountain areas. The temperatures dictate as to whether they need to hibernate through the winter and this may only be for two or three months.

They start breeding from March through to the summer. Small, white, oval soft shelled eggs are deposited in wall crevices, hollow bricks etc.
There is no parental care and incubation may be from around a week to several months depending on ambient temperatures.

This is less widespread than the more common Moorish Gecko. It is confined to Southern Portugal and the Spanish Mediterranean coastal zone.

It is a more slender lizard with a finer head and overall pink tones with far fewer spikes. The definitive difference is that this gecko has claws on each toe whereas the Moorish gecko has well developed claws on only the third and fourth digits. 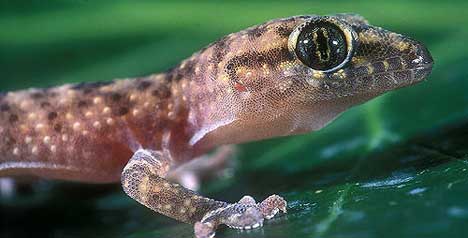 The overall length of Hemidactylus turcicus (Salamanquesa rosada in Spanish) can reach 12 centimetres but the body length is normally 50 to 53 millimetres.

The tail often has black and pink banding, with the body mottled sandy, pink and somewhat translucent tones.
Their food consists of nocturnal insects, small spiders and larvae.

These Geckos inhabit similar areas to the Moorish gecko and even share the same places including stone walls, tree trunks, ruins, barns and dwellings.

They are not likely to be found at more than 300 metres above sea level, preferring a warmer mean temperature.
Although crepuscular and nocturnal in their hunting habits they can be seen basking in the sun occasionally.

Breeding takes place between April and July. The small, soft shelled, white eggs will be deposited in cracks in walls, under rocks and in soil. They are around 8-9mm by 10-11mm in size and may be single or two together.
The incubation can be from 40 days to a little over three months depending on temperatures and humidity.

Clive and Sue launched wildsideholidays.com as an advertising medium for ethically-minded nature holiday businesses in Spain. The aim is to provide an internet site on which people searching for this type of holiday can easily find what they are looking for.

Together with iberianature.com, wildside holidays also run the iberianature forum – the best online resource for learning about the nature of Iberia.