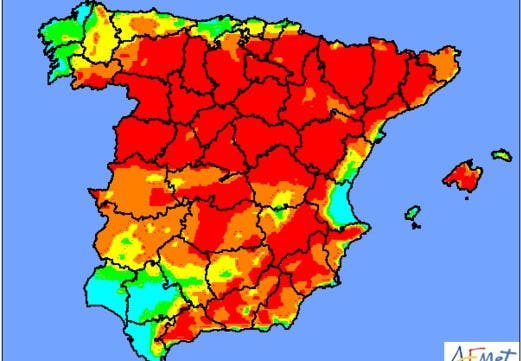 SPAIN’S meteorological agency AEMET has issued weather warnings in fourteen regions across Spain as a heatwave, dubbed Lucifer, takes its stifling grip on the peninsula.

Red alerts signifying extreme risk are in place on Thursday for parts of Aragon and Catalunya in the northeast of the country where temperatures are set to reach 43ºC.

On Friday the red alerts move further south to Andalucia where temperatures in the provinces of Jaen, Sevilla and Cordoba could top 44ºC.

Meanwhile much of the rest of the peninsula and the Balearic Islands are on yellow and amber alert for high temperatures in what is the first official heatwave of the year in Spain.

A heatwave is classified as a prolonged period of intense temperatures and this one is stretching across southern Europe as hot winds blow in from Africa and the Sahara desert.

Meteorologist Rubén del Campo from Aemet warned that the high temperatures expected over the next few days were “not normal, we are talking about an intense and lasting heat.”

He added: “We can’t rule out that a temperature record will be broken.”

On Thursday much of the mainland and inland Mallorca will be hit by temperatures exceeding 36-38ºC while in the northeast of the country, around the Ebro valley the mercury could soar to between 40 and 42ºC.

Aemet also forecast electrical storms in interior and mountainous areas of the northeast and eastern parts of Spain.

Don’t expect much respite at night when the mercury isn’t predicted to drop below temperatures of 24ºC and 25ºC.

The heat is forecast to ease on Sunday, with temperatures set to become significantly cooler on Monday.

Only the northwest of the peninsula and the Canary Islands remain unscathed by the heatwave with Galicia and Asturias forecast to see a light drizzle in coastal areas on Thursday morning.

The heatwave comes after a damning UN report on Monday warned the world is already experiencing the effects of climate changes and that they are set to get rapidly worse.

Spain warned people to be vigilant as the risk of forest fires intensifies in a heatwave and also issued guidelines on how to keep cool.

“The heatwave could lead to adverse effects on people’s health and to a significant risk of forest fires,” said a statement from Aemet.

It is also expected to push up prices of electricty to record levels due to a lack of wind power and greater demand due to air conditioning.