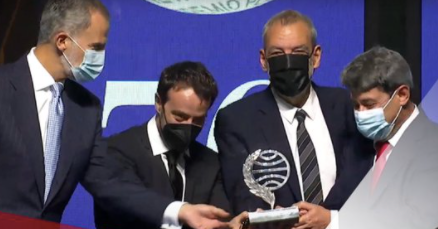 The world’s highest paying literary trophy was awarded to Agustin Martinez, Jorge Diaz and Antonio Mercero in presence of King Felipe VI in Barcelona on Friday night at the Planeta awards ceremony.

Fans of the novels, that centre on Elena Blanco, a hard-nosed police inspector, believed thatCarmen Mola was a female academic who wrote in her spare time.

The prize winning novel The Beast however was not written by a female professor, but three middle-aged television scriptwriters who have worked on Spanish shows such as On Duty Pharmacy and Central Hospital.

They chose to write under one name because they believed collective work is not as valued in literature – but what else do we know about the trio behind Spain’s greatest literature mystery?

Who is Carmen Mola?

When three people stepped up to the podium on the Planeta stage to collect the top award, the audience were noticeably shocked. For months rumours had been swirling over the true identity of the much loved female author – but few imagined that the winner of the 70th edition of the Planeta Prize would be a group of middle aged men.

Antonio Mercero, Jorge Diaz and Agustn Martinez revealed themselves as the creators of Inspector Elena Blanco, penning the crime series after years working on Spanish shows such as On Duty Pharmacy, Central Hospital and No Heaven Without Breasts.

How did they decide on the name Carmen Mola?

Martinez suggested in an interview with Spain’s EFE news agency that the authors chose to write under one name because “collective work is not as valued in literature [as in] other arts such as painting or music”.

“The name came out in two minutes,” said Martinez. “It was like a kind of joke. At one point Carmen’s name came out, someone said ‘cool’ and that’s how it stayed.”

How do they manage to write as a three?

Mercero said that, although it may seem otherwise, it was not difficult for them to build the stories as a trio. In fact, he said, it allowed them to write more original content.

“We added the talents of three scriptwriters accustomed to working as a team,” he said. “We were able to leave the ego at the door and realise that something nice could come from it. Putting three people, six hands together, in the same room improves things a lot.”

Diaz added that the group has to agree on everything that is being done. He explained:  “To take out the plots little by little. We are doing what we can and taking it out with enough ease.”

What will happen after winning the Planet Award?

In retrospect Planeta tipped its hand to more than one person winning the prize on Thursday, when it announced the main award would be increased from €600,000 to €1m,  outstripping the Nobel Prize for literature, which at current exchange rates is worth just over €100 less, at 10m Swedish krona.

Each of the authors will take away a third of the €1m total.

But the men have insisted the prize money will not change the way they work.  “Carmen Mola’s books will continue to be signed by Carmen Mola,” they said.

“Literature has always been a field in which we were free, we did what we wanted to do. Work with colleagues, friends, and dedicate ourselves to this type of novel that Carmen Mola is. We have always had that freedom that she has given us and I hope we continue to have it.”