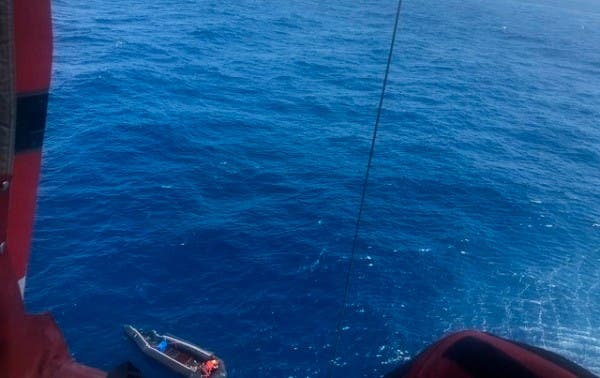 A 30-year-old woman was found clinging to an overturned dinghy 135 miles off the coast of the Canary Islands and airlifted to safety.

The woman, who was found in “bad state” of dehydration and heat exhaustion, said another 50 people had been on board when the boat capsized.

Rescuers retrieved two corpses but have found no trace of the other occupants of the boat which was trying to reach the Canary Islands from the west coast of Africa.

The survivor landed at Las Palmas de Gran Canaria airport on Tuesday, after a cargo ship spotted her 135 miles off the coast and has been taken to the hospital for treatment, according to Spanish news agency Efe.

Once there she told an interpreter that 52 other people had been on board.

The two bodies found next to her on the overturned boat were also recovered and brought ashore, a spokesperson said.

Weather conditions were reported to be bad at the time.

Last year, more than 23,000 migrants arrived in the Canary Islands, eight times more than the previous year, according to the Spanish Interior Ministry.

And so far this year, 7,531 migrants have arrived in the Canaries, more than twice as many as in the same period in 2020.

The Spanish NGO Caminando Fronteras estimates that 1,922 people died or disappeared while trying to reach the Canaries by sea between January and the end of June this year. By their calculations, the Atlantic route claimed 1,851 lives last year.