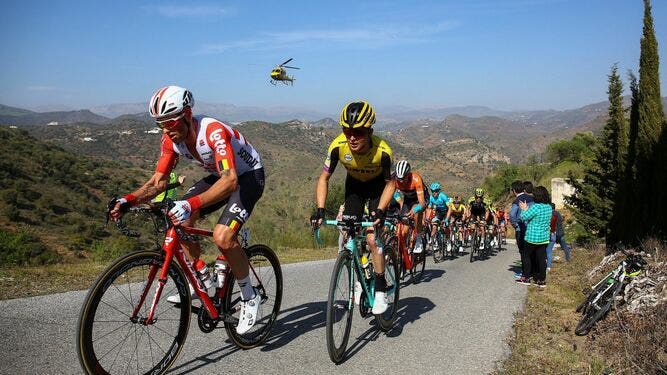 IT’S been a long time coming. Spain’s most scenic cycling competition  (finally!) returned to the roads last week – and today it will be passing through Andalucia.

The Vuelta a España 2021 brings the Grand Tour season to a close and the Rincón de la Victoria on the Costa del Sol is making the final preparations for the arrival of the professional cycle race this afternoon,

Due to the Covid-19 pandemic, the race had to be cut down to just 18 stages last year as the stages intended to take place in the Netherlands had to be cancelled.

But, thankfully the 2021 race is back up to top gear, with all 21 stages taking place well within the Spanish borders to avoid difficulties.

And for the first time ever, the stunning seaside town of Nerja will be the location of the finishing line for a stage of the race.

Prepare for a party: hundreds of spectators are set to line the streets during the race and there’ll be dozens of cheer stations for spectators to catch a glimpse of some of the world’s best cyclists. Whether you’re a bike fan or not,  why not go along and share your support.  Here is your ultimate guide to the day.

What is the Vuelta a España?

Along with the Tour de France and Giro d’Italia, the Vuelta a España is part of the trio of three-week long races that make up the Grand Tour. The Spanish race, now in its 76th year, attracts huge names from the cycling world.

The race is known for being one of the greatest challenges on the cycling calendar, with huge mountain stages and few flat roads, all endured in the scorching last days of the summer heat.

Where is the race?

The 2021 race started in Burgos and will finish in Santiago de Compostela in the Galicia region and bookended by individual time trials.

Today racers should arrive in Nerja, on the N-340, at around 4pm, before passing through Torrox Costa (4.13pm), Lagos (4.23pm), Algarrobo Costa (4.27pm), Torre del Mar (4.32pm, with an intermediate sprint) before zooming towards the outskirts of Vélez and take the detour towards Almáchar. They should then  arrive at around 5pm, hitting the summit at 5.06pm.

Next, the race will pass through Moclinejo (5.17pm) and Benagalbón (5.20pm), before entering Rincón. The arrival is scheduled at 5.40pm (based on an average speed of 40 km/h) and the race will finish in Avenida del Mediterráneo.

You can check the full remaining route below:

Twenty-three teams are participating in the 2021 Vuelta a España.

Reigning champion Primož Roglic has dreams of winning his third consecutive Vuelta, but he faces a challenge from Egan Bernal, who just needs the red jersey to complete the full set of Grand Tour wins.

But the Vuelta is far from a two-horse race, as Bernal’s team-mate Adam Yates makes his Grand Tour debut in Ineos colours, and Movistar try to live up to the hype in their home race.

Take a look at the start list of the 2021 Vuelta a España HERE.

Where to watch it

If you can’t make it along to cheer in person, don’t worry! In Spain, the racing will be shown by RTVE, while in France Eurosport will be showing the race. For those in the UK you can watch the Vuelta on Eurosport and GCN+.

Who has won before?