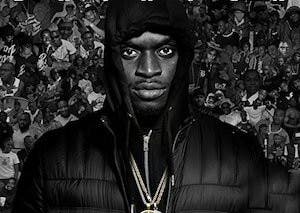 The British rapper Sneakbo was forced to flee to safety after being attacked by thugs on a night out in brash resort Puerto Banus on Spain’s Costa del Sol.

The 29-year-old musician from south London, whose real name is Agassi Babatunde Odusina, shared the incident on social media claiming he was ‘laughing’ about it.

But a 40 second clip showed Sneakbo confronted by a group of men, one of whom threw a drink over him and then slammed the glass onto the ground shattering it.

The rapper then ran away across the busy Julio Iglesias Avenue while the group gave chase.

He later attempted to laugh off the incident on Instagram, saying: “I promise I’m laughing, not a scratch on me.

“Minor issue with some folks I’ve never met in my life.”

He insisted: “I still don’t want security cause they won’t be on what I’m on when it gets cracking.”

Sneakbo, whose first UK single The Wave in 2011 peaked at 48 in the UK charts. His debut album Brixton was released in 2018 and latest Jetski Wave 3 is out now.